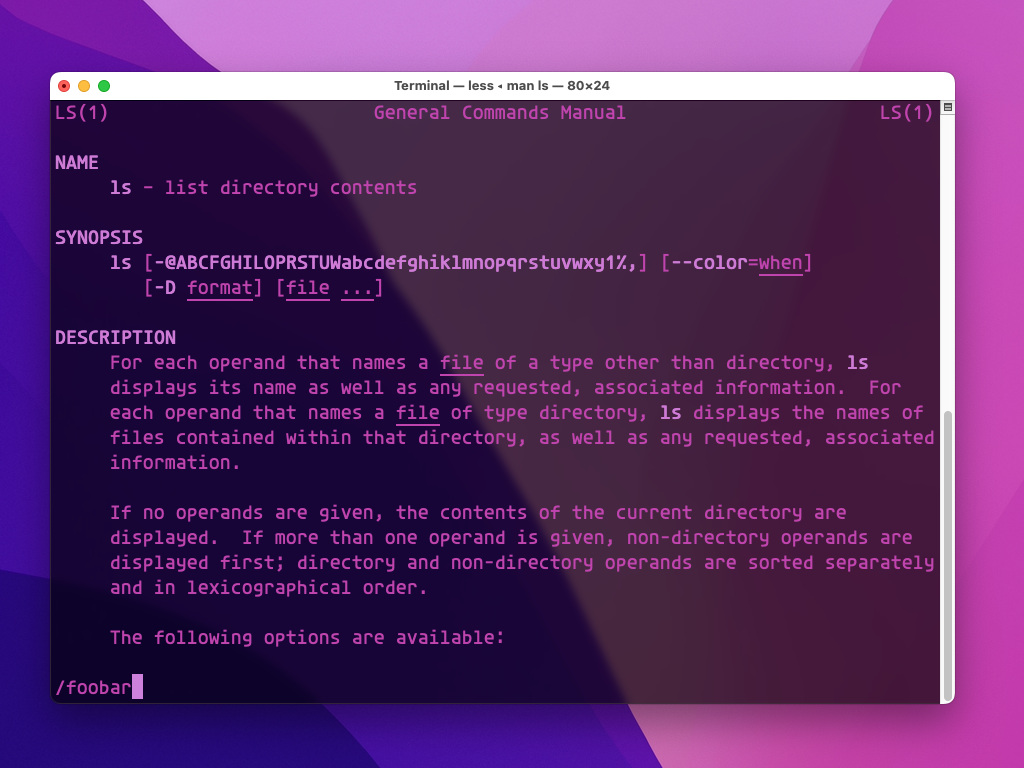 Hopefully, you have seen a command line interface, CLI, before. You can find them on nearly every system: Windows, Linux, macOS, and even my old Amiga had a CLI. Each of them work slightly different, but there is one standard which has come to dominate, which is based on the Unix operating system. Both Linux and macOS derive from the Unix operating system. When interacting with a CLI on Linux or Mac, you will use mostly the same Unix commands. Unix command line interfaces have also become popular on Windows the last few years through Windows Subsystem for Linux (WSL).

You interact with the Unix command line through a program, usually called terminal or console. Here is an example of using iTerm2 on my Mac. In this particular example, I am issuing commands to look the contents of the Godot directory, where I have stored some games I have developed. 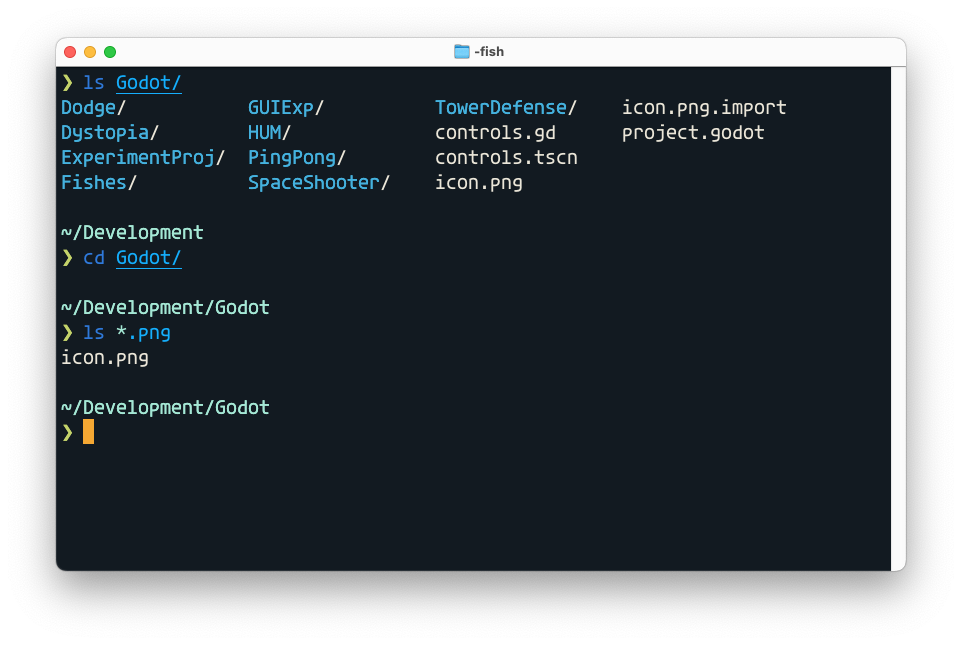 If you use a graphical file manager such as Finder, this Godot directory would have looked as follows: 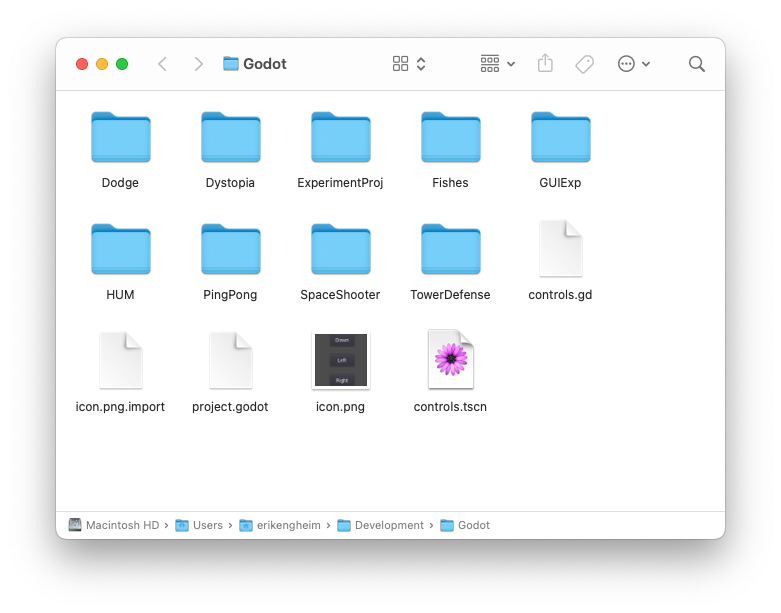 The second point requires some justification. It is true that it is easier to understand a graphical user interface, but only up to a point. Large and complex graphical applications can be hard to learn. What to do is not obvious. Finding the right buttons to click or dialogs to open may require a video or series of images with careful step-by-step instructions.

Text-based interfaces in contrast are straightforward to explain in articles such as this one. Complex operations which you easily forget how to do, so you can easily copy to a notebook and write an explanation. These notes can later easily be retrieved using search tools. Searching images of a graphical UI is much harder.

In this article, I will teach you how to do the following things:

Work with Files and Directories

When you start the Unix command line, you will get some kind of greeting. It will differ depending on the system and configuration you have. Mine looks like this:

You will have a cursor next to a prompt, indicating that the CLI is waiting for you to type a command and press enter. The prompt at the start of the line is usually one of the symbols $, # or ❯. Mine is a ❯ because I am using the Starship prompt. It adds several cool features, but you don’t have to use it.

Let us look at the most basic commands ls, cd, pwd, man, cat, touch and file.

With the ls command, you can see what files and directories are in a directory, just like you can with a file manager.

This shows the contents of the bin directory on a Unix system. That is where Unix keeps binaries for the most common commands. We call a file containing a program you can run for binary.

The ls command is smarter than your file manager. You can do many neat tricks. Characters such as * and ? get interpreted in a special way. They form what we call glob patterns. You can use glob patterns to filter what files are show. The * matches any number of letters while ? matches a single letter. So a? would match files named ab, ab, ad, ae and so on, while *.txt would match files named foo.txt, bar.txt, baz,txt and so on. What is up with the foo and bar names? Those a just silly names we tend to use in programming and Unix circles. As soon as you see the words foo, bar, qux or baz you should know that they are placeholders. The specific word used isn’t important. It could be anything.

Let us jump a bit around and look at some directories on a macOS system (will be similar on Linux).

From now on, I will show above the prompt what my current directory is and files will have a * as an ending, while directories have the ending /. You can get trailing slash on your system by writing ls -p instead of just ls. The -p is called a switch. Every Unix command comes with several switches affecting how they run.

Okay, let us make some dummy files with the touch command.

The mkdir command makes a directory with a given name, while touch can be used to make one or more empty files. With these files, we will look at how we can use glob pattern with ls to show only a subset of the files you have in the current directory.

If you want to only see the .png files in the animals directory you can use the *.png glob pattern which means we don’t care what the name of the file is as long as it ends with .png

You can find all three letter filenames with an o in the middle using the question mark ? which matches a single letter.

Once you know the basics of Unix commands you want to be able to look at specific detailed information which does not make sense to cover in a blog post. We can look at the manual for each command using the man command. man ls will give us the manual page for the ls (list) command. It will drop you into a pager program. A lot of beginners immediately ask: How do I get out of this program?! Whether you are inside the vim program, less, or man you press q to quit. In the vim editor you may have to press ESC key and then colon : before you can hit q to exit.

Here is an overview of the most useful commands for navigating inside a man documentation page:

See if you can find the manual entry for the -l switch. It prints info about directory contents on long form. You can search for it by writing /-l. The entry should look like this:

We can try the -l switch to see how we get more info:

This shows a whole bunch of information about each file. Each column is for the following:

The last columns are for when the file was last modified and finally the name of the file.

Our files are empty, so to be able to test the cat command used to show contents we have to actually edit the files and add some content. You can use any text editor storing text as UTF-8 encoding, or you can use the echo command to add text to files.

In many cases we need to display some text to the user. We can use echo for this purpose:

This example many look at bit pointless but it makes sense when writing longer scripts doing multiple things where you want to give feedback to the user. You can also use it to show the contents of environment variables. We can use named variables to store text which can later be shown:

Why do we need the dollar sign $? Because if you only wrote NAME the system would not be able to realize you want the contents of a variable named NAME. It would think you wanted to write the text NAME:

So while you don’t need the dollars sign $ when setting an environment variable, you will need it when using it.

How Commands are Located with Binary Search Path

But maybe we have programs in other locations. How do we make the operating system find them? Say we have binaries in the /opt/bin directory which we want to use. Each search path is separate with a colon : and we can simply insert the existing path when redefining what the PATH variable should be:

There is however one problem with what we just wrote. As soon as you close the terminal window the path will be forgotten. That is why you need to add this line to the .profile or .zshrc file in your home directory. Which file you add to depends on whether you use the bash or zsh shell. You also have to add the export keyword otherwise the environment variable will not be known outside the shell configuration file .profile or .zshrc. So you write:

Because a path may contain spaces, we tend to use quotation marks " around text strings to show that it is one contiguous block of text. Hence we usually write:

In this example we put /opt/bin first, but what if we wrote it like this instead?

That is perfectly valid and means that when looking for a Unix command the system will first look in one of the paths already defined in PATH before looking in /opt/bin. That may matter in case you have commands with the same name in multiple locations. For instance your operating system may come installed with the python language but then you install your own newer version to /opt/bin. Since you want your newer version to be used by default you put the /opt/bindirectory first, so it gets priority.

For Git I used the -w switch because it will cause the calling program (Git) to halt until I close the editor. That is not desired behavior for me when using Julia. 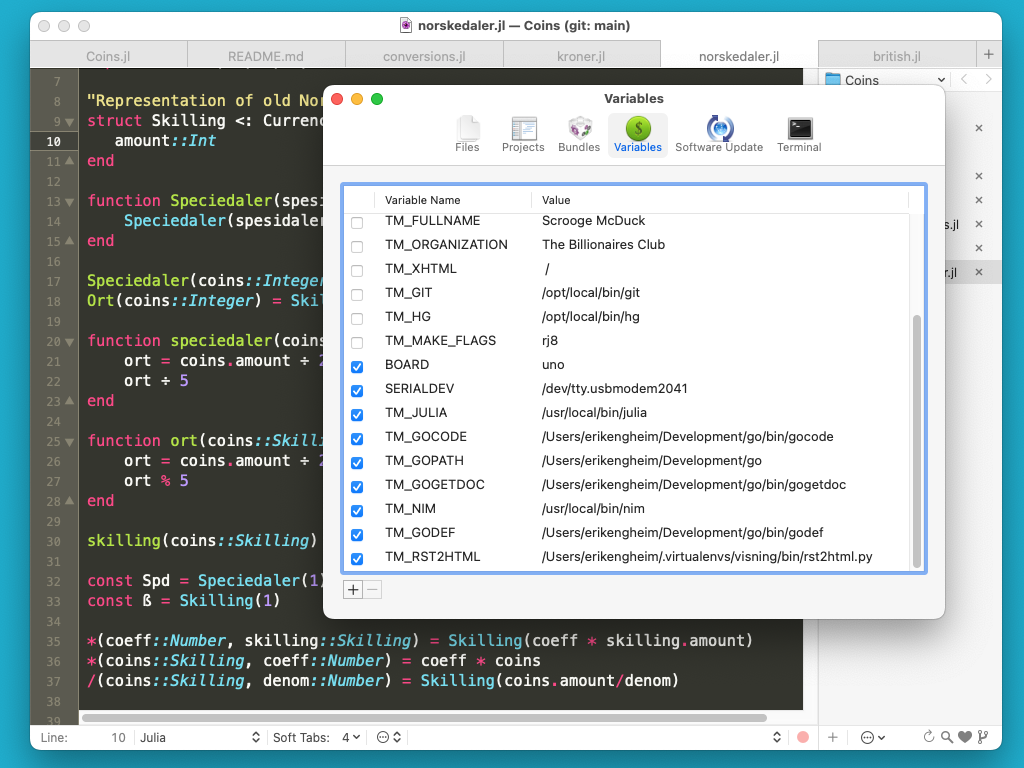 Exported environment variables are inherited by child processes. What do you mean? A running program is called a process. Processes have parent-child relationships. The terminal window is a process and when run a command such as ls, man or touch you are creating a child process of this window, or more specifically the shell process running inside the window.